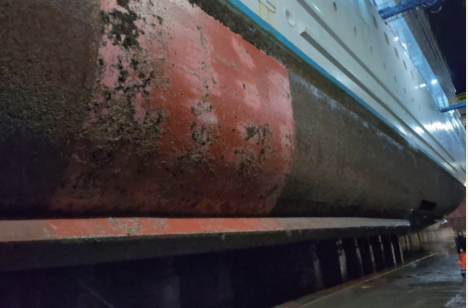 Nippon Paint Marine has reported substantial interest in its AQUATERRAS® antifouling system following growing evidence that cruise ships are returning to service after lengthy lay-up with hulls completely free of biofouling.
After full application of AQUATERRAS to a pair of cruise ships in early 2019 and 2020, followed in mid-2020 by subsequent pandemic-enforced 18-month anchorage, in-water inspections in late 2021 found their hulls were in conditions that exceeded expectations.
Photographs taken of the coating on hulls on other cruise ships, bulkers, tankers and containerships laid up in the Philippines, Bahamas, La Spezia and the Sea of Marmara – areas known as being particularly challenging – also showed areas of “excellent antifouling performance”.
The biocide free coating was introduced to the market in November 2017.
Ships coated with silicone-based paints, hard coatings and regular SPCs(Self-Polishing Coatings), including the company’s own top-performing A-LF-Sea range, were unable to compete with the performance of the AQUATERRAS coated hulls. Extensive growth build up was often commonplace during the Covid hiatus.
With some big players in the cruise sector rolling out technology upgrades to reduce fuel consumption and carbon emissions, the coating is seen as being very much part of a shipowner’s emissions abatement strategy.
Aside from the fuel and emissions reducing potential from a ship with zero fouling, what is particularly remarkable about the performance of the self-polishing paint is that it contains no active biocides.
In addition to a number of major cruise brands that are specifying antifouling for application to a number of vessels this year, the self-polishing coating is being viewed with interest by some of the world’s largest container lines and navies.
According to Wilckens, there are several navies currently carrying out static and dynamic tests as the operational requirement of naval vessels means they are often idle or alongside for extended periods.
Until then, the cruise sector looks set to continue to lead the way and invest in biocide free antifouling technology.