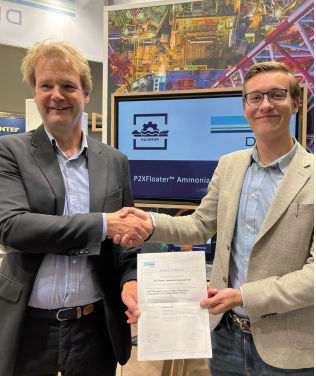 An industrial scale concept for a floating production unit to produce green ammonia at sea has secured Approval in Principle(AiP) from DNV, affirming the technical feasibility of the design.
The so-called P2XFloater concept, developed by Norway-based H2 Carrier, is based on the conversion of an existing Very Large Gas Carrier into a floating, production, storage and offloading unit(FPSO) that can serve to produce environmentally friendly ammonia for the local or for the world market.
The FPSO would source electricity from a wind farm or other renewable source to provide power for electrolysis of seawater to produce the hydrogen as input to the so-called Haber-Bosch process which produces liquid ammonia by combining hydrogen and nitrogen of under high pressure and high temperature. The required nitrogen would also be produced onboard the FPSO.
DNV’s Vice President, Business Development for Floating Production, Conn Fagan, said the AiP covers all aspects of the integrated vessel concept including structural integrity, mooring, ammonia production, ammonia storage and cargo handling.