According to the International Maritime Organization’s(IMO) Carbon Intensity Indicator(CII) regulations, as of 2023, all sea-going cargo, Ro-pax and cruise vessels of 5,000 GT and above will have to report yearly CO2 emissions. Based on these values, the vessels will receive a rating from A to E.
After 2023, the mean baseline for the class definition will be reduced annually, leading to a continuous ranking deterioration if no countermeasures for emissions reduction are applied. If a vessel is ranked in class D or worse, the owner must implement improvement measures to reach at least class C within three years, or the vessel will lose its emissions certificate. The first review of the reduction factors is scheduled for 2026.
Currently, the IMO uses a tank-to-propeller(TTP) approach to CII calculation, meaning that the CO2 emissions considered are those generated by the fuel in a vessel’s bunker storage. With the source of the fuel not yet considered, the use of 'green fuels' does not help the owner to improve the CII ranking.
In 2025, the EU is set to introduce the FuelEU Maritime regulation, allowing for a well-to-propeller(WTP) approach. Here, emissions impact is considered from the fuel production and transport stage, supporting the use of green fuels. The IMO is discussing a similar approach, but there is no defined date for its introduction as yet. A review of the regulations is expected in 2026. 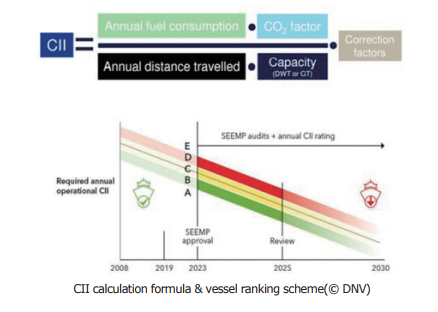 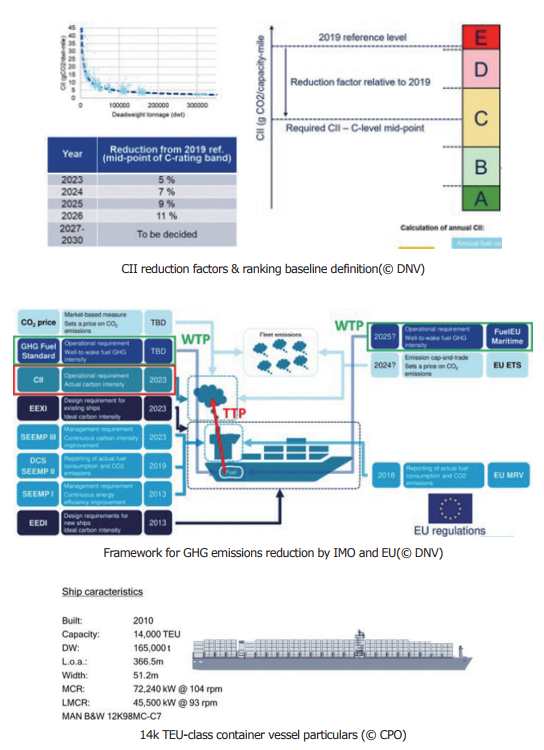 Measures that can be applied to improve a vessel’s CII value include:
• Optimization of ship operations including auxiliary operations and hotel load to reduce fuel consumption.
• Limitation of main engine output resulting in a reduction of maximum vessel speed.
• Optimization of hull resistance by hydrodynamic measures.
• Installation of carbon-capture technologies to draw CO2 from exhaust gases.
• Using alternative fuels from renewable sources.

For container vessels, CII evaluations were performed using the example of CPO Containerschiffreederei’s 14k TEU-class vessel.
According to this evaluation, current operations at high speeds consistently yield D and E ratings. If this were to continue with no improvement measures implemented, the vessel’s emissions certificate would end in 2028. In 2026, the vessel would have to limit its speed to 15 knots to maintain a C rating, and to 14 knots in 2030.
This could be achieved by exchanging the propeller for one optimized to lower speeds. However, this can affect powertrain behaviour, with altered torsional vibrations potentially increasing ageing and wear of the powertrain components.
For bulk carriers, evaluations were performed on an exemplary bulk carrier built in high production numbers worldwide.
As displayed above, without changes, the vessel would reach a D rating in 2026. To maintain a C rating, its fuel consumption would have to be reduced by 13% in 2028, or by 18% for a B rating. This could be achieved by limiting the main engine output. 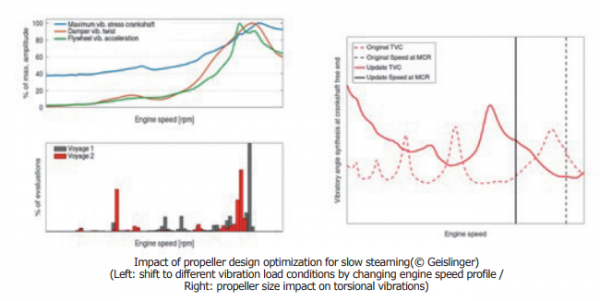 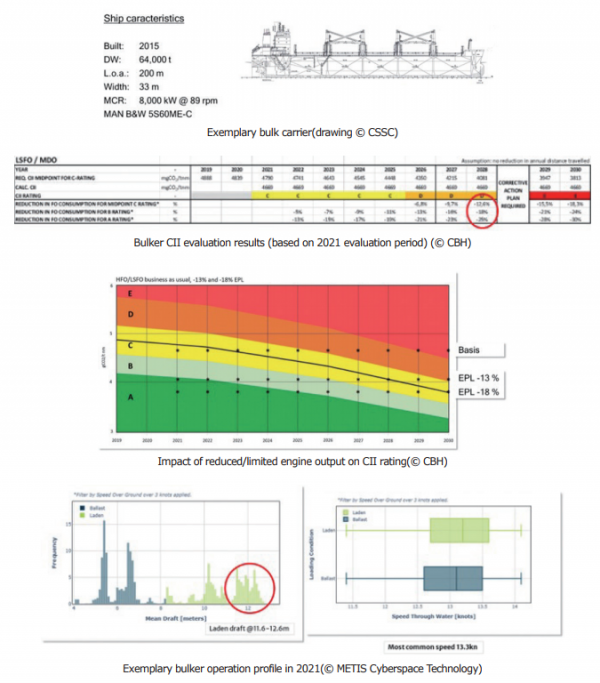 Limiting the engine power by 13% would maintain the C rating until 2030. At -18%, the C rating could last two more years. If the shipowner were to select this approach, the operational impact would require further investigation. With lower ship speeds leading to more days at sea, the vessel's availability might be reduced.
The data beneath shows that limiting the output would bring the engine operation close to the speed range in the grey bar(area marked in grey), resulting in a small operational window for the main engine. While this can be overcome by installing a new torsional vibration damper, the new damper would be approximately 30% heavier than the original.
With the low boost pressure of the turbocharger, limiting engine output to below 50% MCR leads to poor combustion quality and high temperatures. One solution could be to modify the turbocharger specification. Achieving MCR output for emergency operations after modification requires the installation of a controllable turbine bypass. This prevents cylinder pressure from being exceeded due to excessive boost pressure at high engine loads. 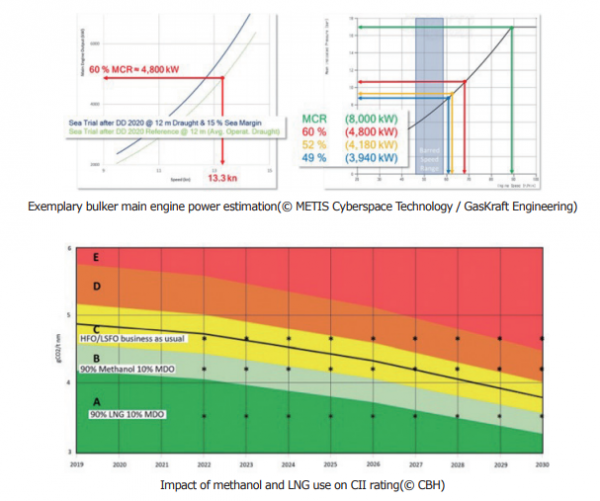 Another option for reducing vessel emissions is using alternative fuels. For bulk carriers, green methanol represents a promising option since existing bunker storage can be used by applying an appropriate coating. However, the total operational range of the vessel would be reduced due to the lower heating value of methanol, which should be considered in route planning.
With the IMO’s current TTP approach, fossil LNG is preferred to green methanol. The combustion of methane(CH4), the main component of LNG, produces less CO2 than methanol(CH3OH) combustion, which would maintain the vessel’s C rating within the current framework for just three years. Retrofitting the vessel for methanol operations will make sense only when IMO adopts the WTP approach. The technical concept for such a retrofit is already available and can be applied today.
It should be noted that LNG is not a preferred fuel for bulk carriers because of the space requirements of the cryogenic storage tank.
The impact of optimized vessel operations was investigated for a capesize bulk carrier by comparing its performance in 2021 and in the first half of 2022. The aim was to define the optimum speed profile and instruction speed based on the 2021 data for reducing CII factors for 2022. Through the METIS IoT platform, which created mathematical and machine-learning models specific to the vessel, high-frequency data was taken with a sample period of 15 seconds. 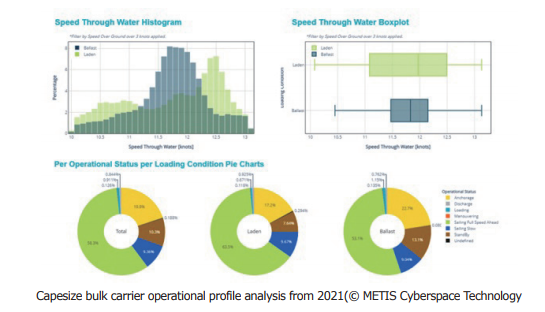 The analysis of the vessel’s operations in 2021 resulted in the following key findings:
• The vessel travelled in laden condition at speeds ranging from 10 to 13.3 knots.
• The vessel was at anchorage almost 20% of the time.
A statistical analysis for several speed-over-ground ranges of the main engine’s fuel-oil consumption per hour and nautical mile revealed the problem of assessing instructed speed per voyage.
Based on the findings from 2021, the vessel's operational profile changed as follows:
• The profile of laden speed was reduced by around 10.6 knots.
• The anchorage time was reduced by half.
• The trim was adjusted to the new instructed speed.
As displayed above, the CII value was reduced by nearly 20%, while the travelled distance increased by 25%. For the first half of 2022, the vessel saved 930 tonnes of fuel oil.
Ultimately, CII fulfilment requires close operational planning between charterers, owners and operators. A detailed operational data analysis with the involvement of component suppliers and service providers at the earliest possible stage can support the avoidance of issues. 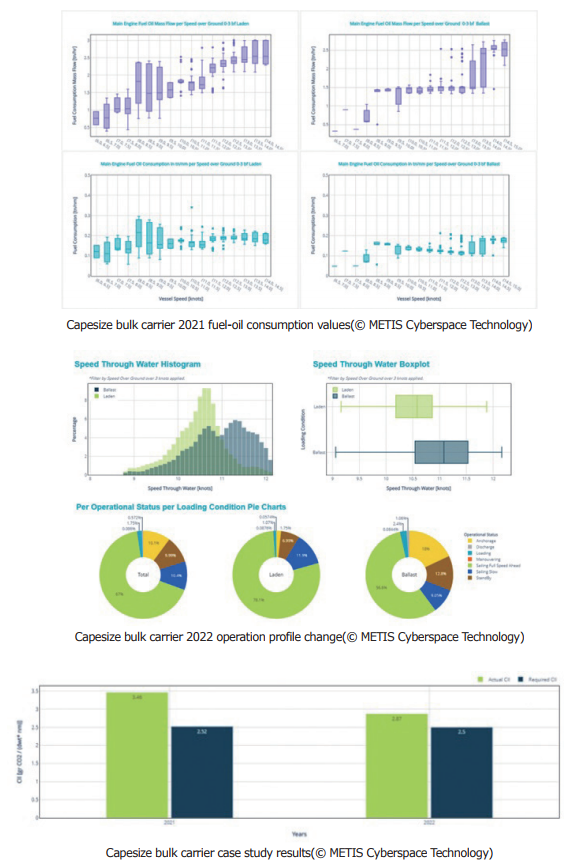