- Contributing to promoting the early introduction of ammonia fuel

Since ammonia does not emit carbon dioxide(CO2) when combusted, it is expected to be a next-generation fuel that contributes to global warming countermeasures. In Japan, technological development is underway for ammonia fuel mixed combustion power generation at coal-fired power plants as an innovative next-generation thermal power generation technology that contributes to the reduction of CO2 emissions. On the other hand, when using ammonia in existing thermal power plants, there are issues such as the problem of securing land for new onshore facilities including storage tanks and regasification facilities, and the large initial investment cost.
An A-FSRB is an offshore floating facility that can receive and store ammonia that has been transported via ship as a liquid, warm and regasify ammonia according to demand, and then send it to a pipeline onshore. An A-FSRB offers the advantages of shorter construction time and lower costs in comparison to construction of onshore storage tanks and regasification plants. In fact, the A-FSRB is expected to speed up the adoption of ammonia fuel and contribute to its wider use as a lower-environmental-impact next-generation fuel.

In August 2020, NYK Line, Japan Marine United Corporation(which has a 49% share of NSY), and ClassNK started joint R&D of an A-FSRB. However, since the demand for fuel ammonia is expected to increase further in the future, the three parties have concluded a new joint R&D agreement with IHI, an ammonia-related equipment manufacturer. 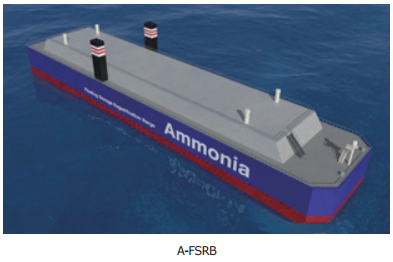 Efforts of each company in joint R&D 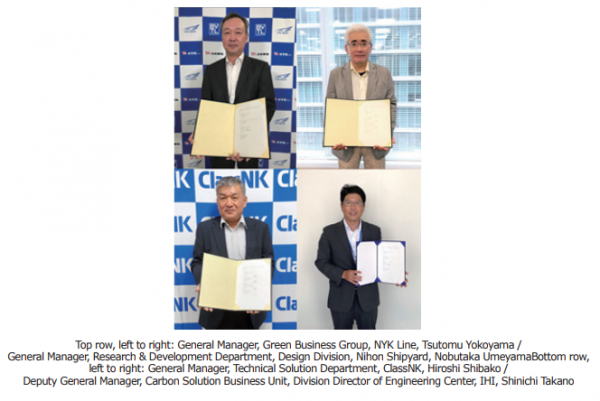 The parties will promote R&D with the aim of becoming a solution for introducing ammonia fuel mixed combustion to coal-fired power plants that domestic electric power companies are currently working on.